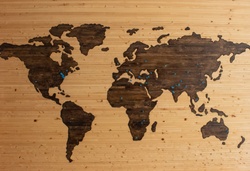 Russia/Ukraine from An Emerging Markets Perspective

What has happened so far?

As the time of writing on Thursday 24 February, the tensions in Ukraine have escalated with Russian military action in parts of Ukraine. This followed President Putin recognizing the two self-proclaimed separatist regions of eastern Ukraine and formally moving Russian troops into these disputed regions. Explosions have been reported across cities in Ukraine while the shelling of key infrastructure assets (including Kyiv airport Boryspil) has occurred. On this escalation, it is reported that NATO and its allies have responded with a threat of more, far-reaching, sanctions.  After helping Belarus to curb protests, Russia now speaks of the “Union State” and it can be assumed that a Ukrainian absorption would join this “Union State”.  The conflict with Ukraine could be the largest in Europe since World War Two.

Russia is a key player in crude oil and natural gas and so energy prices are seeing upward pressure. Brent Crude oil prices surpassed US$100 a barrel for the first time since 2014 on 24 February. It could be that OPEC+ – which includes Russia – will become more robust and permanent. We should expect medium-term energy prices to be higher than previously modelled, as OPEC+ discipline will become more credible. The path to peak oil will become more expensive for energy consumers in this transition.

Upward pressure on commodities also exists, as Russia is a major supplier of nickel (EV batteries and stainless steel), palladium (catalytic converters), titanium (modern aircraft and military applications) and many other esoteric periodic table elements. The duration of this commodity move will depend on the severity of sanctions imposed by the West and the reaction of Russia. Inflation is likely to move higher, which is effectively a tax on consumers paid to producers like the Persian Gulf countries and Russia.  As growth slows and inflation peaks, stagflation is a risk that could complicate central bank action globally towards tightening, as well as provide a headwind for risk assets.

What about Russia-China relations?

The reaction of Western countries to the situation in Ukraine could be of interest to China, given the country’s own situation with Taiwan. Russia has been reticent about getting too close to China in the past, given fears over Chinese aspirations in Russia’s undeveloped Far East and East Siberia, and the relative imbalance in economic power (China’s economy is around 10 times larger).1 However, Russia-China relations appear to have improved. This may be attributable to some common ground in ideologies, such as being more assertive vis-à-vis the West and the prevailing international order. China, not the IMF, is already the 'lender of last resort' to certain countries and the resulting bipolar world could bring an end to globalization as we know it.

The rise of techno-nationalism – linking technological innovation and capabilities directly to a nation’s agenda – also looks likely to increase. We have already seen a mobile game company being reported as banned in India given a Chinese company’s minority stake in the company. The US has already restricted investment and exports to certain Chinese companies.2

What are the broader debt and equity investment implications?

As a result of the escalation of conflict, despite international pressure, Russia could become more isolated, with the reduction of access to Western know-how, technology and capital. Some funding restrictions have already been imposed on Russia; the US prohibited participation in the secondary market for Russian government bonds issued after 1 March. The Russian equity valuation discount of around 30%+, when compared to the rest of EM (reflecting political governance risks), could widen as the available investor base shrinks.

The country could become even more rent-seeking – an effort to increase one's share of existing wealth without creating new wealth – as hopes for innovation to improve economic prospects diminish. Innovation and evolution in the Russian digital space could stall. India is experiencing a boom in business models across all digital verticals funded from domestic, multinational and public/private equity investors – this will not be Russia’s future. Well-funded and cash flow-rich Russian incumbents will get stronger as less resilient competitors wither on the vine. Equity markets, in our view, will overlook such fundamentals given geopolitical risk.

We have already seen volatility and weakness as investors digest the news; trading in most risk assets today (Thursday 24 February) has practically come to a halt, as is common when major geopolitical events first unfold. Sanctions imposed so far have been fairly mild in terms of a limited impact on financial markets. Although we do not yet know what further sanctions will be, Western countries have hinted that they will likely seek to hinder Russia from trading in foreign exchange markets, which makes servicing debt very difficult. In addition, there is likely to be a broader ban on secondary trading of Russian debt, both corporates and sovereign, as was the case with certain entities’ debt after the annexation of Crimea in 2014. Weakness in financial markets will likely persist until we have clarity on sanctions at the very least. Until then, it is difficult to understand what the coming weeks may bring on a geopolitical front.

1Source: IMF, GDP based on current prices (US dollars in billions), 2022.
2The Entity List is a tool used by the US Department of Commerce to restrict the export of certain sensitive technologies and components to organizations who are involved in activities that threaten the national security or foreign policy interests of the US.

Emerging market investments have historically been subject to significant gains and/or losses. As such, returns may be subject to volatility.

Energy industries can be significantly affected by fluctuations in energy prices and supply and demand of fuels, conservation, the success of exploration projects, and tax and other government regulations.

Janus Henderson is not affiliated with The Pacific Financial Group, Inc. (TPFG). The information presented is the opinion of TPFG and is believed to be accurate but has not been independently verified. TPFG makes no warranties as to the accuracy of the information or any representations made or implied. Articles cited/linked to are the express opinion of the third party author. There are no affiliations between TPFG and any third party links. All information may be changed without notice. The information should not be construed or interpreted as an offer or solicitation to purchase or sell a financial instrument or service, and should not be relied on or deemed the provision of tax, legal, accounting or investment advice.